Photo by Milad Alizadeh on Unsplash

We get it. Everyone is fighting the blues during the pandemic-related lockdowns, even though it may be disguised in the form of nice or not-so-nice acronyms. We dug into our treasure trove to share a set of blues you’ll want to embrace, starting with the most beautiful city in Morocco. 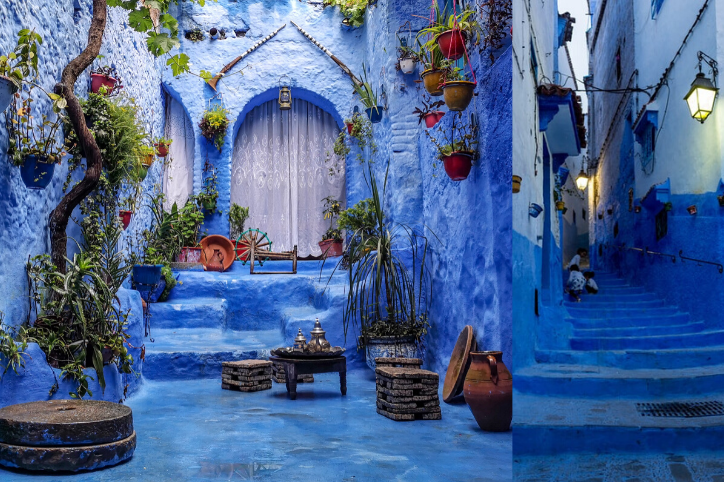 Wander in the alleyways of Chefchaouen for a glimpse of the daily lives of Moroccans.
Photos by Kyriacos Georgiou and Robert Brands on Unsplash

Chasing the blues in Chefchaouen

Chefchaouen literally means “look at the horns”, as the shape of the city’s hilltops resemble the chaoua of the goats. But that’s not quite the reason why this picturesque city is so blue. Its origins are said to be the work of Jewish settlers who regarded blue as the symbol of the sky and heaven.

Most modern-day travellers make the detour to this northern Moroccan town in search of Instaworthy snaps but there’s more to the mesmerising blue medina. Appreciate the Blue City’s history and culture with a private walk led by one of most knowledgeable guides in Morocco; enjoy the lovely Andalusian gardens and definitely make a stop at the ethnographic museum in the 16th-century Kasbah. Shopping is less frenzied here compared to the bigger cities like Fez and Marrakesh.

Plan My Trip to Morocco 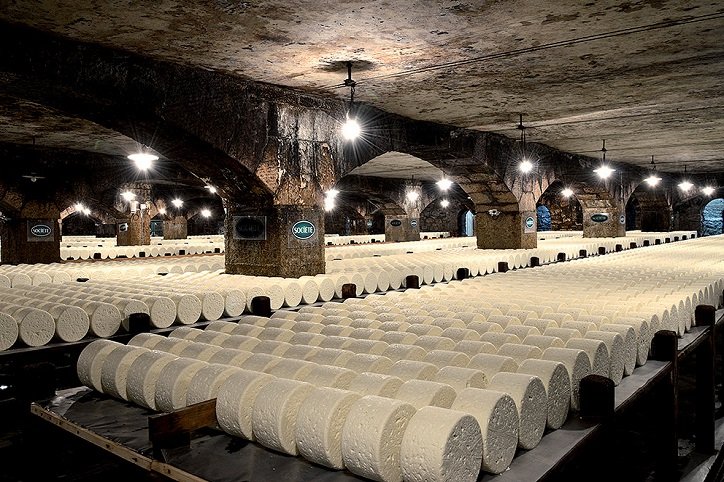 The world-famous Roquefort cheese is only made from the Lacaune sheep breed and must be matured at least 14 days in these cellars.
Photo owned by Tourisme Aveyron

This sharp, pungent cheese can put off even those who swear cheese runs in their veins. But to lovers and connoisseurs of blue cheese, substitutes for this Penicillium-invaded dairy goodness are nothing but cheesy.

If you’re hankering for a taste of the best blue cheese, make your way to a peaceful little village called Roquefort-sur-Soulzon in south-western France. Roquefort cheese, dubbed the king of blue cheeses and named after the town it originated, is still matured in the cool rock caves. Unlike its famed peers the Stilton and Gorgonzola, Roquefort is made from unpasteurised sheep’s milk.

For a most unconventional way of appreciating blue cheese, however, set your sights on – surprise, surprise – Japan. Watching grand mixologist Shuzo Nagumo deliver the gorgonzola cognac, which he counts as among his adventurous cocktail creations, in one of his stylish bars in Tokyo is undoubtedly a treat in itself. 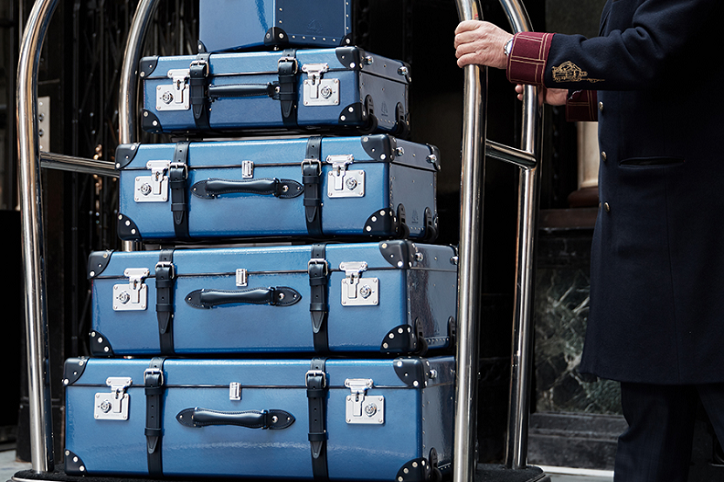 Globe-Trotter’s Sapphire Blue collection was inspired by the gemstone that is second only to the diamond in terms of mineral hardness. Photo owned by Globe-Trotter

Sadness often gets expressed in shades of blue, but so does water, the sky, calmness and coolness. Globe-Trotter’s Sapphire Blue limited-edition deluxe collection quite possibly is that one blue you need for all of the blues you can possibly associate with as a traveller. This British brand is best enjoyed in the UK, of course.

With one of these Herfordshire-handcrafted pieces, the sky’s the limit when it comes to your globetrotting – take it to places you crave. We don’t need to tell you how cool the high-gloss metallic exterior accompanied by leather corners and straps feels and looks. And that sinking feeling when the luggage goes missing, followed by that huge wave of relief when you find out it’s just temporarily misplaced. PSA: half the collection is already sold out.

Plan My Trip to the United Kingdom 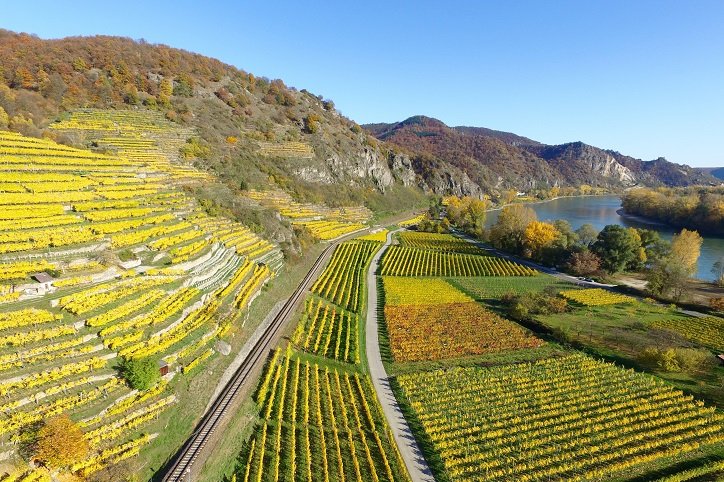 The town of Durnstein in Austria’s Wachau Valley sits along the Danube river and is known for its ancient vineyards and castle ruins.
Photo by Chris De Wit on Unsplash

Is the Danube really blue?

It’s a familiar and uplifting waltz loved all over the world. In its birth country Austria, it’d be near impossible to avoid hearing The Blue Danube, also dubbed the country’s second national anthem. Quite frankly, this timeless classic will be constant music to your ears – at an orchestra performance, in a quintessential Viennese café, in the boutiques and certainly on an indulgent private cruise down the famous waterway.

While The Blue Danube might be the perfect music to appreciate the idyllic, historically-significant Austrian towns such as Durnstein and Melk, Johann Strauss II was nowhere near this great river when he composed the waltz series. The Danube did not flow through Vienna back in 1866 and few, if any, would call it blue. Strauss had been simply inspired by Karl Isidor Beck’s German poem from the early 19th century, where each stanza ended with “an der schoenen blauen Donau” or “by the beautiful blue Danube”.

No matter that The Blue Danube doesn’t quite evoke the blues and seemingly has an inapt title, it continuously floods the world with plenty of spirit-rousing notes and firmly puts Austria as one of the great nations of classical music.

Plan My Trip to Austria 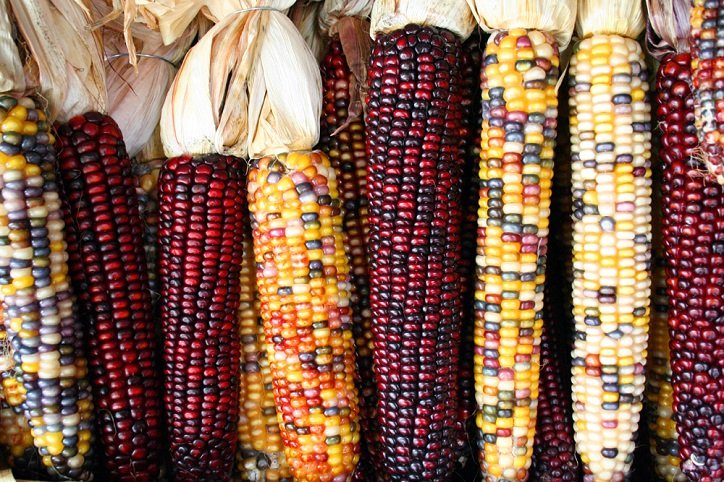 Blue corn: Popping out into the mainstream

Thanks to its all-natural outstanding hues and health benefits, blue maize is fast becoming a sought-after food. It gets its blue pigment from anthocyanins, which are also found in blue fruits such as blueberries; the colour of blue corn ranges from blue-grey to a burnt purple shade.

Blue corn is a traditional crop used by native American tribes including the Hopi, who are also said to use blue corn to symbolise the southwest in their rituals. The range of contemporary blue corn products has in recent years steadily expanded beyond snacks such as blue corn chips to cereal to tortillas, pancakes and other baked goods made from blue cornmeal.

Including blue corn into your diet is more than just aesthetic – the protein content in blue corn tortillas is generally about 20% higher than yellow corn tortillas. It also has a lower glycemic index compared to its paler counterparts.

To sample the freshest blue corn, head to New Mexico or northern Mexico. In the central America nation, you’ll have the opportunity to drink corn – a traditional beer made of blue corn called tesgueno and an antioxidant-laden brew made of malted red and blue corn.

Plan My Trip to Mexico 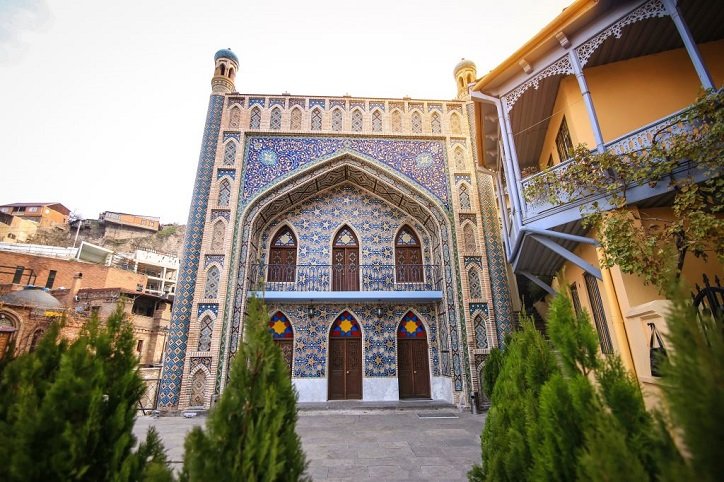 Soak in the glory of Tbilisi’s mosaic baths

There are plenty of places around the world with a reputation for rejuvenating hot springs or therapeutic waters, but not many are named for their thermal goodness. Tbilisi, the capital of Georgia, is distinctly impressive then, for “Tbili” actually means “warm” in Georgian and its bathhouse scene is also spectacularly hot – aesthetically – thanks to a predominantly blue exterior.

Tbilisi’s Orbeliani Baths is said to boast the last surviving example of Islamic influence in the city. Dating back to the late 17th century, this structure with its ornate Persian-style façade is also one of the most photographed in the Abanotubani bath district and popular with upscale travellers. The interior is sleek and contemporary, thanks to a renovation in 2018.

During its heyday, Tbilisi had nearly 70 baths but just a handful of traditional ones remain today. The Orbeliani or Chreli Abano is not only a precious slice of history but also a gorgeous window into Georgian culture and way of life.

Plan My Trip to Georgia 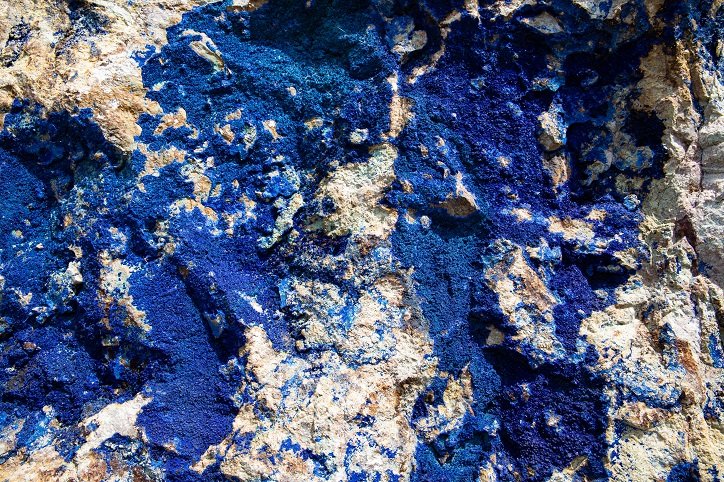 Lapis lazuli is the source of ultramarine, the world’s most expensive paint colour. Photo by Geert Pieters on Unsplash

The most complex of all mineral colours, ultramarine paint in its natural form can only be created by crushing the deep-blue semi-precious stone, lapis lazuli, into a powder. Its name comes from the Latin term “ultramarinus” or “beyond the sea”, as it arrived from Asia via trading ships. It was first introduced in Europe around the 15th century from the mines of Badakhshan in northeast Afghanistan.

Perhaps the most famous painting featuring true natural ultramarine is Vermeer’s Girl with a Pearl Earring, created during a period when ultramarine was more valuable than gold. Vermeer was said to have used ultramarine lavishly in his works and, as a result, sank into debt. The Girl with a Pearl Earring is housed in the Mauritshuis gallery in The Hague, Netherlands. After a two-year examination, researchers have recently revealed features about the artwork that were previously unknown, such as the existence of eyelashes.

Plan My Trip to the Netherlands