The world has a way to fascinate even the most seasoned traveller – no matter how extensively you explore it, it still manages to beguile you with its best-kept secrets. In my case, it was Georgia that swept me off my feet.

Bordered by Russia, Turkey and Armenia, this off-the-beaten track country pledges an intoxicating meld of influences – not quite Asian, not quite European – but rather a blend of all the peoples that once invaded this land and left bits of their culture for future generations.

Modern-day Georgia is impossible not to fall in love with, as I discovered on a Land Rover small-group driving expedition. From a cosmopolitan capital city to a collection of startlingly beautiful mountains, this enigmatic country is a fascinating place to visit. 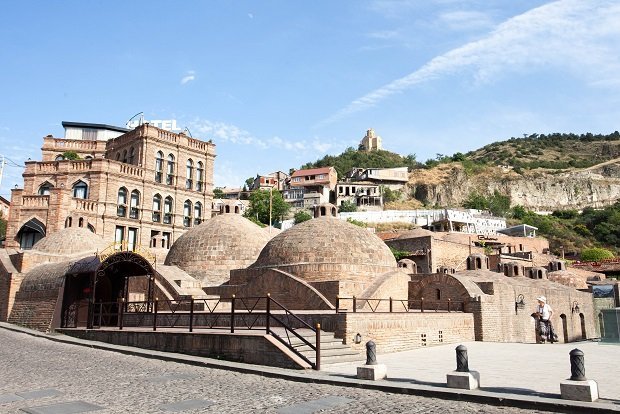 Tbilisi’s dome-shaped bathhouses are set against a background of craggy mountains.

A land of contrasts

The capital of Tbilisi impressed me immensely with its many contrasts: striking modern structures – think Bridge of Peace and the Music Theatre and Exhibition Hall – juxtaposed against historical buildings, imposing medieval churches and monasteries, crumbling old houses, tattered Lada cars and Soviet-era statues. Since tourism is still in its infancy here, Tbilisi is indeed a pleasant city to explore without feeling overwhelmed.

As you wander through the historic old town, you will find hip cafés, old bakeries where traditional bread makers knead local specialties, and hammam bathhouses where you can pop in for a relaxing session before continuing on your exploration of the monuments and sights.

To experience the best views of the city, take the cable car up to the ancient Narikala Fortress, which overlooks the National Botanical Garden of Georgia and boasts a panoramic view of the new and old city.

And if you love panoramic views, another must-go vantage point is the 6th-century Jvari Monastery located in Mtskheta, the former capital of the Georgian Kingdom of Kartli-Iberia, barely 40 minutes’ drive north of the capital. The monastery, one of three medieval churches that make up the Historical Monuments of Mtskheta UNESCO World Heritage Site, overlooks the town and the intersection of two rivers: Aragvi from Caucasus meets the river Mtkvari from Turkey and together they flow to the Caspian Sea. You can see the changing colour of the water as the rivers blend together! 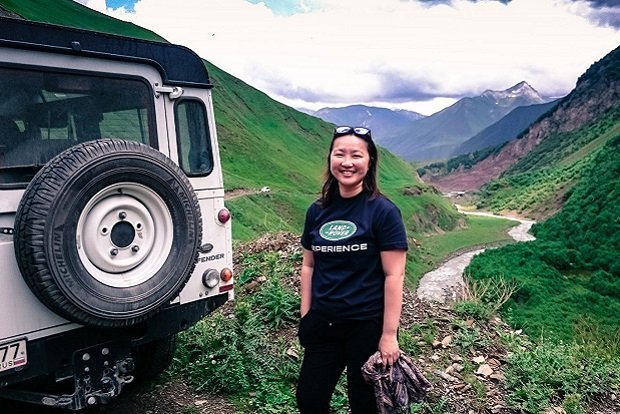 After Tbilisi, we drove to the rural and less-developed towns and villages of the country. Our first stop was near the border of Azerbaijan and within the live firing range. Our excitement gave way, a little, to nervous laughter when a guard – friendly as he was – approached us to remind us not to take photos for security reasons.

While the country’s incredible landscapes are a draw in themselves, I couldn’t help but be constantly reminded of the unique perspectives one experiences behind the wheel.

The vehicle, of course, makes a difference in navigating this terrain. The Land Rover Defender is a really comfortable ride for both normal and off-road driving; its seats made the long-distance and bumpy ride bearable. Having driven in a number of places around the world, including Yunnan in China, I must say this was one of the most demanding. The roads, while decently paved, can be full of potholes especially the non-motorway roads. However, looking on the positive side, I got to practise my skills of manoeuvring this bulky-looking vehicle.

Our most challenging drive with the Defender was, perhaps, the ascent and descent of the Gergeti Trinity Church in the Caucasus mountains, the highest mountain range in Europe. But the spellbinding view was totally worth the effort! Alternatively, you can choose to get to the church by taking a 2- to 3-hour hike on a different route. 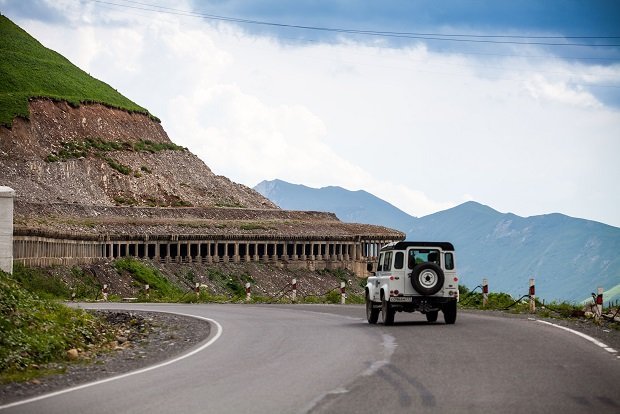 Driving around Georgia will give you the chance to visit small, off-the-beaten track towns and villages.

While driving up, we had to watch out for small Lada taxi drivers, who perhaps thought they were Formula 1 pilots, swishing up and down the narrow road. And of course, in such a terrain, our concerns were the puncture-tire threatening rods sticking out inconspicuously from the wall of the mountain. We literally rode on the edge when the car had to veer to the barrier-less side to let oncoming cars pass. We survived, thankfully, with winning compliments from my strict Russian convoy instructor.

Later on, we visited the quaint small town of Sighnaghi, previously an agricultural centre under the Soviet Union. Since 1975, Sighnaghi has been home to several state-protected historical and cultural monuments. Today, the town boasts remnants of 18th-century fortifications and is known for its culinary delights. Here, we had a fabulous Georgian lunch in a Tuscan-inspired restaurant, which was prepared by a Michelin-star-worthy chef.

The farm-to-fork concept is a norm in Georgian villages and towns as the lands are laden with local produce and the ingredients are extremely fresh when they are delivered to restaurants. While we were told that our daily meals include different provincial Georgian cuisines, it was very hard to tell as a first-timer. Even though some of the dishes have the same names, they look different at each table.

All the meals typically comprise appetisers, bread, cheese, salad and main courses that can be a combination of soup, stews, poultry, meat or fish. The sauces accompanying each of the dishes are amazing. I particularly like the ajika – a spicy paste or sauce seasoned with hot chilli peppers; my travel companions insisted the goat cheese was to die-for.

Another memorable meal was at a Kazbegi guesthouse. We were hosted by a very lovely lady whose genuine motherly hospitality really warmed us up on a very cold night. The beef stew and khinkali (a type of Georgian dumpling) were absolutely divine. We capped off the day with a khinkali master class – an exciting cooking experience that involved twisting knobs of dough and jokingly throwing baking powder at one another.

With its myriad fertile wine regions, Georgia proudly claims to be one of the oldest wine-producing countries in the world. Today, the ancient Georgian traditional Qvevri wine-making is recognised as an UNESCO Intangible Cultural Heritage. While I have visited many famous wine-producing countries and countless wineries, it’s the first time I have witnessed such a unique wine-making process.

Judging by some reactions to our visit there, Georgia is a misunderstood, over-feared and underrated destination. The fact is, I felt safer and more welcomed here than some places I’ve visited; it’s also more beautiful and diverse compared to a number of less-touristy destinations such as in Central America. 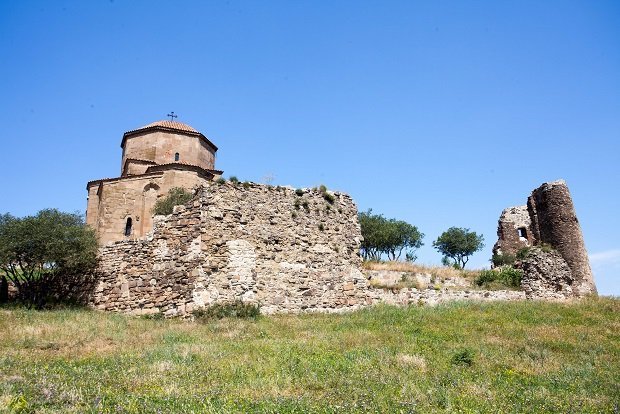 Georgia teems with ancient landmarks such as Jvari Monastery.

Its melange of cultures is truly fascinating; Borjomi is particularly intriguing and a melting pot in the truest sense!

Overall, our trip was peppered with experiences to cherish a lifetime. We journeyed with a small group of amazing travellers with whom we exchanged travel experiences over endless flow of wines every night and, needless to say, this resulted in firm friendships by the end of the trip.

Till the next trip, I’ll say “gaumarjos!” – a toast to good travel companions, more amazing travel tales and sincere wishes to everyone.

Plan My Trip to Georgia